Since 1 July, TSI has been established in the former Calmettes premises. This disability-friendly company employs 46 people performing sub-contracting work for industry. 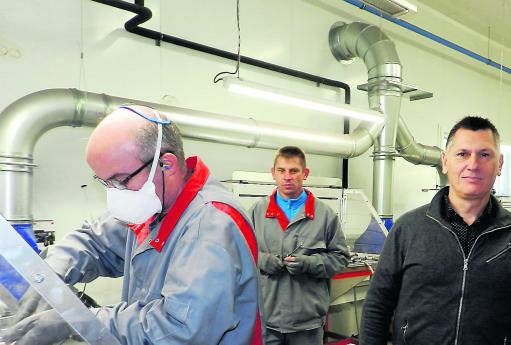 Stéphan Mazars and Claude Joulie ensure the well-being of their employees, 91% of whom have the status of disabled worker / Photo DDM

The 80-year history of the Calmettes establishment, specialised in the manufacture of pre-cooked dishes, charcuterie and walnut kernels, came to an end at the beginning of the new century. The vast premises had been vacant for ten years. This summer, machining centres and drilling columns have come to replace the sausage machines. TSI (Technic’Services Industrie) opened in these premises on 1 July 2016, arriving from the Aiguille industrial zone in Figeac.

TSI was born from the takeover of Altariva Figeac by STS Decazeville, with which it has now been incorporated into STS Groupe. “We purchased Altariva and continued operations in their premises in the Lot region for one year, before moving to Capdenac-Gare”, explains Stéphan Mazars, the group manager.

The premises on Boulevard Paul-Ramadier have recovered a new lease of life. “We brought them back to life”, says Claude Joulie, the site manager. For the moment, half of the 3,400 m² have been converted, with special attention given to rationalise the production tool and facilitate employee working conditions. “It was our intention to allow natural light to enter the building by creating openings”, explained the manager. This attention is noteworthy for a company that aims for “social responsibility, corporate citizenship and solidarity”. Like STS, TSI is a disability-friendly company, with 91% of its 46 employees (including 42% in production) recognised as disabled workers. “Physical handicaps”, specifies Claude Joulie. They are victims of health problems, road accidents or back complaints. Many of them have had to learn a new profession. “We mainly require dexterity for manual work. We then provide them with support in order to increase their skills”, explains their manager.

Even with its special status, the company has to face the competition. “If we want to survive and continue to invest, we have to generate added value. And to do that, we have to boost the level of our employees”, insists Stéphan Mazars. The results at the end of the year will be positive. “We will reach our goal”, says the manager, who speaks of recovered confidence (Altariva had suffered difficulties). “We have gone from six to twelve customers”, he is happy to say.

TSI performs subcontracting work for industry with a concern for diversification, while its big sister STS is solidly established in the aerospace sector. In the Capdenac plant, aerospace assemblies are carried out (for Figeac Aéro or Ratier Figeac), cast parts are machined and others are deburred, for example for Diaz in Vayrac (north Lot). The symbol of this diversification is the assembly of perfume bottle stoppers for Auriplast in Aurillac. “We worked on the most recent stoppers for Kenzo, which you can see on TV adverts”, notes Claude Joulie. They also perform exterior services, such as the installation and removal of Christmas decorations for Sono Sud-Ouest.

Certified ISO 9 001 and EN 9 100 (an aviation standard), TSI is gradually weaving its network, notably supported by the Mécanic Vallée cluster. “I firmly believe in partnership with complementary businesses”, affirms Stéphan Mazars. Two development projects that currently are on the drawing board, one with a startup and the other in the agri-food sector, should prove him right.

Previous Post
Journal du Composite
Next Post
STS will be present from 4 to 6 December at Aeromart Toulouse!
Menu